We’re guessing that you checked your Facebook News Feed today — and probably did yesterday. And the day before that. If advertisers want to grab an audience’s attention, they know to head to the Feed – where people are sharing, spreading, and consuming content frequently and willingly.

The catch? Although advertisers used to make their way into the Feed for free — resulting in a large “organic reach” — that’s become nearly impossible over the past two years. And it’s become especially difficult since Facebook made additional changes to its display policy in November 2014.

In its latest “pay to play” model, Facebook demands that brands pay for promoted placement in the Feed — making organic reach a thing of the past. One recent study estimated that non-paid brand posts reached only 2-6% of potential viewers, making them basically invisible.

Furthermore, the social media network has recently warned that posts which appear “overly promotional” will not receive placement within the Feed at all, even if they’re paid for.

We know: “Pay to play” sounds like a pretty bleak landscape to operate in as a brand. But, we’re actually here to show you the bright side.

First, we should point out that even though advertising through Facebook posts isn’t free anymore, it’s still relatively affordable. Compared with the costs of ad placement in mass media vehicles like TV and print, Facebook’s promoted posts come at a low cost.

Plus, Facebook’s pay to play model brings the huge benefit of refined targeting methods. By paying for promoted posts and ads on Facebook, brands are allowed to target audiences with specific interests and demographics. Thus, paid and promoted content favors quality of viewers over quantity, which is generally considered the most effective strategy when it comes to digital advertising.

At Zehnder, we’ve found that high-quality posts relevant to our clients’ audiences are more than worth paying for. By paying for the promotion of quality content, you’re ensuring that a post receives the visibility it deserves and that it reaches the most relevant audience. This results in maximum impact at little cost.

But remember: if a post doesn’t resonate with your audience, then there’s no amount of money you can pay to make it a worthwhile investment. This was true when Facebook first rolled out its original pay to play model two years ago, and is especially true given the company’s recent stance against overly promotional content. It’s critical that brands create posts that are engaging, inviting, and original — and then invest in promoting these posts to the right audience. 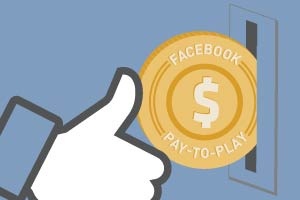 Facebook’s pay to play model doesn’t seem likely to fade out anytime soon; in fact, it’s probably an indication of a changing landscape in the entire social media industry. And although we advertisers are sad to see the days of organic reach fade away, we can’t help but see the positive change that’s come out of Facebook’s new model: brands are finally producing content that is both 1) high in quality and 2) actually worth paying for.

We’ve got a creative team ready to produce engaging Facebook posts for your brand, and media experts who can promote it strategically. Is your company ready to enter the Feed? Let’s talk.