Which Comes First: Technology or the Idea? 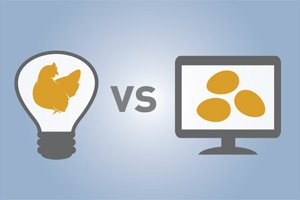 Apparently, Yesterday just fell into Paul McCartney’s head one morning. He woke up, went to his piano, and composed the entire melody in one sitting.

But what if Paul didn’t have a piano that morning? Or what if he’d never learned to play piano? Would he have still written the song somehow – or would Yesterday have never happened at all?

At a recent panel discussion on brand storytelling at the New York Festivals® International Advertising Awards, the same artistic issue was debated. The question: do advertisers think of a story idea first, and then find the right media platform for it; or do they think of a media platform first, and then find the right story idea to fit? It’s the old chicken-or-egg debate, as moderator Michael Schiferl of Weber Shandwick said.

In the end, panelists agreed that ideas for a brand story usually come first, and that their choice of platform (such as TV, social media, photography, print) come second.

But the equation for effective storytelling isn’t actually that easy. Sure, there’s the chicken (idea) and the egg (platform) – but as any breakfast connoisseur knows, if you want to make a meal, there’s a whole lot required after that point. 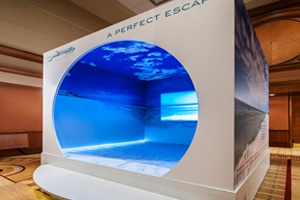 The idea is where it all starts. Unless you’re like Paul (lucky enough to have Billboard hits fall into your head), an initial storytelling idea can be pretty vague. For example, we recently had an idea to re-create an atmosphere for one of our tourism clients. We knew we wanted to transport the client’s breezy beach environment directly to their audience, allowing each consumer to literally experience the beach– but how we’d do that, we weren’t exactly sure.

The platform is what gives the idea shape. According to the International Advertising Awards panel, the mechanism for expressing an idea could limit the idea (especially if you’re on a tight budget), or enhance the idea (like the way face-recognition technology enhanced the “group experience” story idea discussed in the panel). 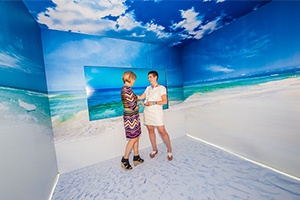 In our example from above, we found a platform that shaped and enhanced our idea. By working closely with our trusted producers, electrical technicians, trade show gurus, and digital whiz kids, we were able to design a climate-controlled, aroma-controlled, and visually striking virtual “escape pod” with moving footage and beach sounds. Without such advanced technology, our original idea might have fallen flat altogether, or been produced in a less engaging way. Instead, it caught the attention of everyone at the event – and caught the attention of national media.

Instead, the right platform allowed us to create a memorable brand story that appealed to our audience’s sense of touch, smell, sound, and sight. It brought them in, engaged with them, and left a lasting impression.

The rest is what turns a basic raw egg into a beautiful, delicious omelet (or scramble, hollandaise, benedict, frittata – you get the idea). Once we have an idea and a platform, we shape and refine it with two key ingredients: input from our client, and input from our audience. 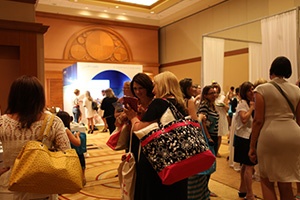 The audience’s input helps us shape the story to make it sell. Audience input tells us what’s popular, what’s not popular, and what catches attention. This is particularly true when it comes to digital advertising, where data about our audience’s actions can inform our decisions.

In our example above, we were able to directly interact with our audience over social media to further expand, shape, and promote the story as it was being told – sort of like the chef stopping by your table during brunch and asking what you think of his omelet, and modifying his future recipe accordingly. Instant feedback and engagement during the idea’s rollout made the link between the story, the brand, and the audience even stronger.

And that’s our process for storytelling. It’s a bit less random than Paul McCartney’s and a bit more complex than a chicken and egg, but we think it works remarkably well. We start with the most powerful component (idea), put it into action (platform), and then customize it to make it both truthful to the client and appealing to the audience.

Want to see it in action? Get in touch and we’ll help you share your brand story.