We've sent our Creative Technologist, Rob Hudak, to CES 2020 to check out the latest, greatest and weirdest tech trends happning at the expo. If you missed what we're looking forward to seeing, check out that post here: Looking ahead to CES 2020

Between Uber, Southwest and Clear, my immersion into technology started as soon as I arrived at the new MSY airport. That combination of applications, displays, and AI would be amplified tenfold once I arrived at CES. Little did I know that human recognition, like Clear’s scanning my fingerprint, would play a major role on the first day of the show.

I had a small hang-up at registration since I forgot to upload a photo of myself when registering and my facial data was not loaded into the recognition software. I was still able to get my badge and skip the facial recognition altogether, which I learned was pretty common even for the techiest of attendees. Who would have thought even software engineers don’t want their face scanned? Either way, I was in! 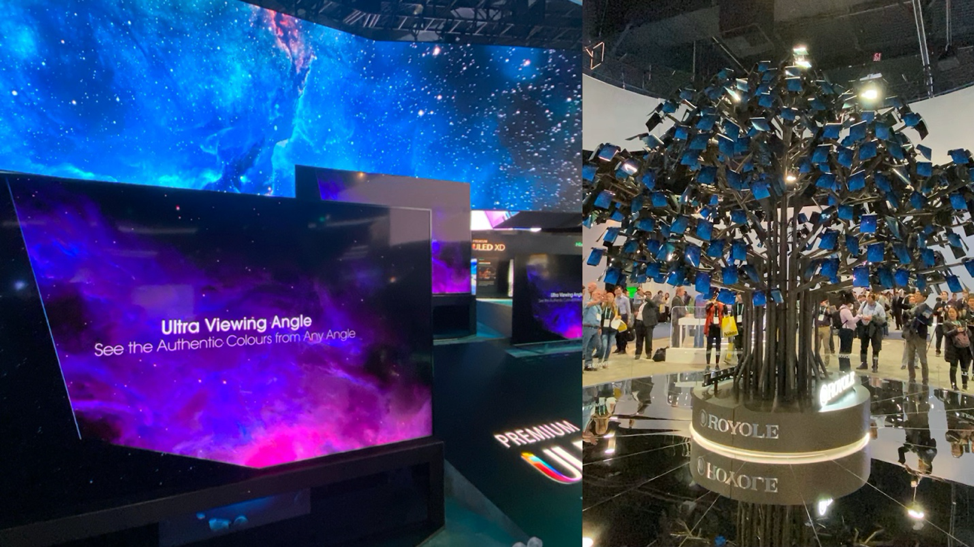 Entering the convention center, I came upon a showcase of giant 8K TV’s with 120” screens and large, bright with beautiful images of outer space and nature scenes. One demonstration had a live makeup artist at work and the ultra-high definition screen showed every shimmer of eyeshadow and crumble of powder being applied. It was a quick lesson in how hyper-realistic we can expect the future of video to be.

Social media was already taking over with a bank of vertical 8K screens that rotate from horizontal to vertical to allow for the display of popular content from TikTok, Instagram and Facebook Stories.

Imagine walking into a room and seeing seven people looking right at you, until you realize they aren’t exactly people but virtual images. NEON is showcasing their Artificial Human, which they describe as “a computationally created virtual being that looks and behaves like a real human, with the ability to show emotions and intelligence.” 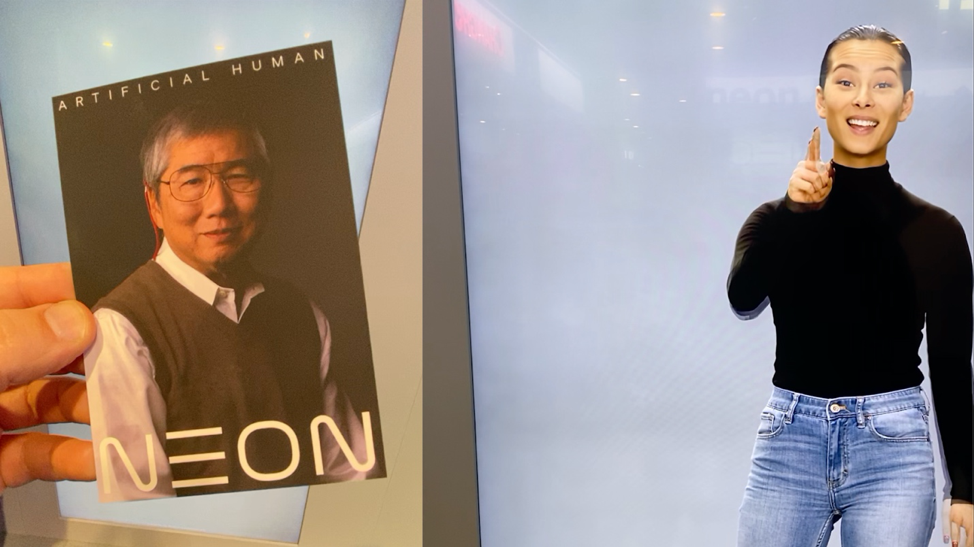 These lifelike “Artificial Humans” followed me with their eyes or would sometimes even wave. One of them was reading a movie script showcasing how an actor could do live reads and work on interactive lines with these beings. As NEON says, “they’re not just an AI assistant, but friends, collaborators, and companions.”

It was all a little too creepy for me so instead I went for something familiar but uncomfortable, airlines. 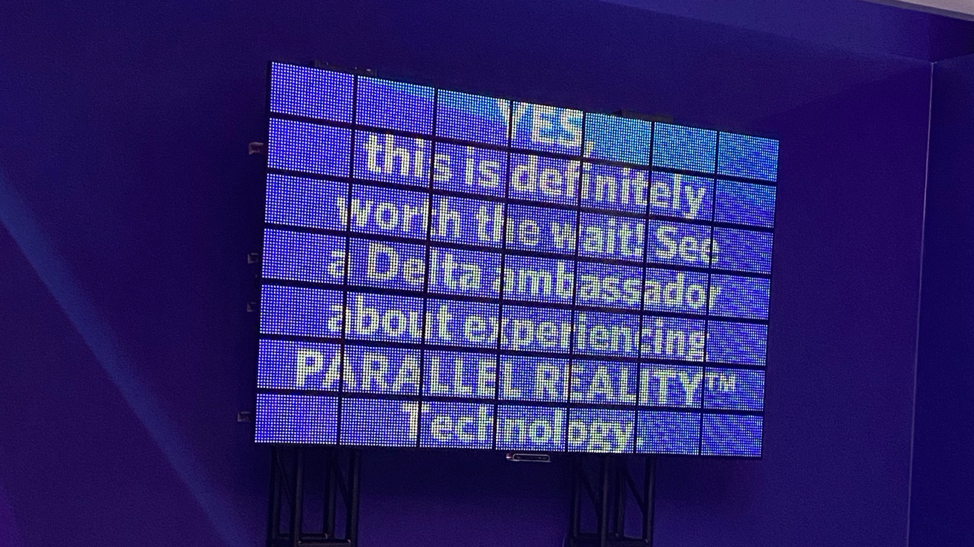 When I arrived at the Las Vegas airport, I noticed the Delta Airlines advertisements announcing their presence at CES. So, I was less surprised but more curious to see Delta’s presence among the Artificial Humans and paper-thin digital displays. Delta is here showcasing a new technology by the team at Misapplied Sciences called “Parallel Reality”. Their tech can recognize multiple people walking past the same airport display and serve them information relevant to only themselves and not the other person.

Three people experiencing the same screen differently, with only the naked eye, is mind blowing. Of course, I stood in line for the demonstration.

While waiting in line I made a friend and when we got to the front of the line they paired us with two other people. The four of us each entered our name, destination and language preference into the kiosk which printed out “boarding passes” each with our own QR code marker. 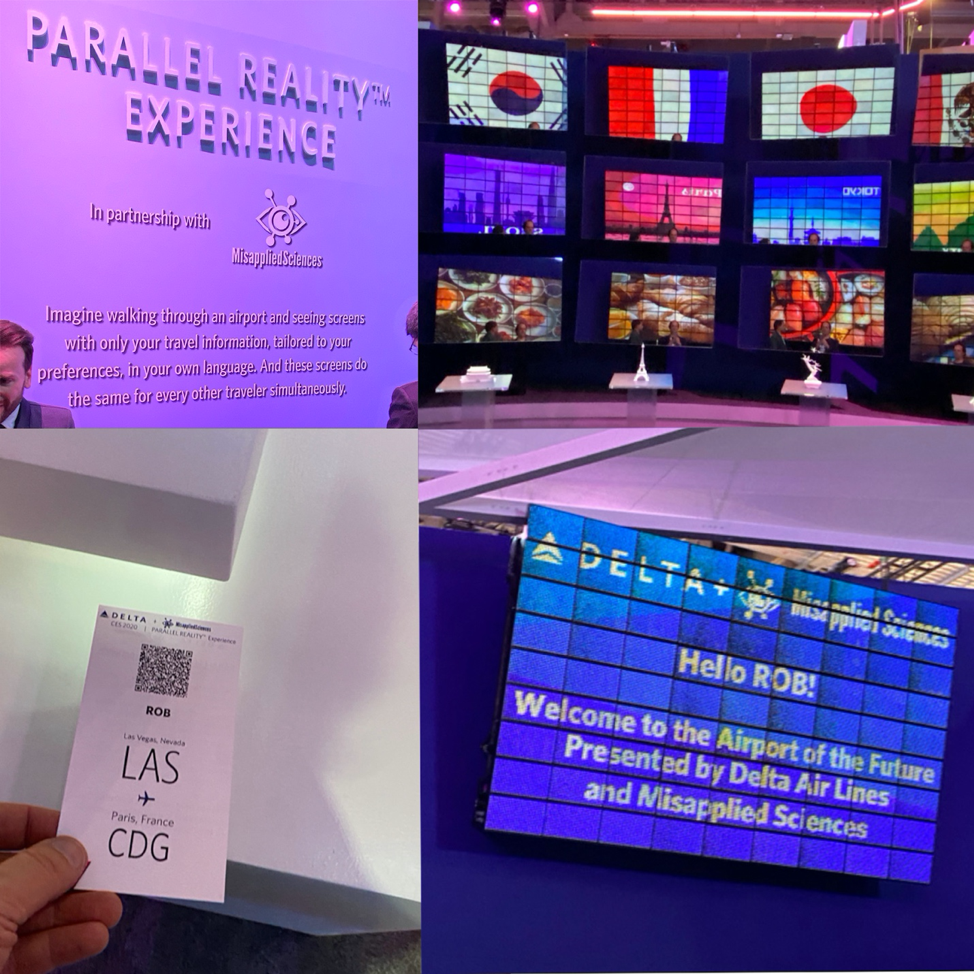 We were then brought into a large room with a single screen and four small pedestals each with a miniature model representing a location: Mexico City, Paris, Seoul and London. We each picked one to stand behind. I picked the model of a Korean home representing Seoul, Korea and looked up at the screen. “Seoul!” “Paris!” “London!” “Mexico City!” we elated, as each of us saw something totally different and personalized.

It was pretty crazy, but this is Vegas and all the best Penn and Teller tricks are done with mirrors, so I was still a bit skeptical. The next part of the demonstration, however, would add a whole new dimension and change me from skeptical to speechless.

We scanned our boarding passes to enter another room and were all asked to look up at the same large hanging screen and describe what we each saw. For me, it was my name and my flight info which remained consistent as we weaved around in the room. We all experienced individual, personalized messages in the language of our choice and we were the only ones who could see it.

The guide explained that once we scanned our boarding passes, cameras tracked us moving through the room and the screen technology took care of the rest based on the tracking of our movement. It was one of the most impressive interactive demonstrations I’ve seen, ever.

So, when can we expect this technology to make travel easier for everybody? Well, it’s not just a pie in the sky, Delta is launching Parallel Reality in the Detroit airport later this year.

Keep Up with us at CES

Follow more of Rob’s journey throughout CES! Follow us on social media for live takeovers and tech spotlights. Are you at CES? Let us know at beyond@z-comm.com and schedule a meet up!